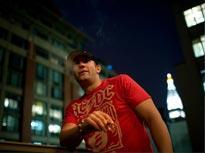 The movement to ban smoking in New York City has grown so quickly that no place seems immune — certainly not restaurants or bars, and public beaches and parks may not be far behind. Now the efforts are rapidly expanding into the living room.

More landlords are moving to prohibit smoking in their apartment buildings, telling prospective tenants they can be evicted if they light up in them.

This month, the Related Companies will ban smoking at some of its downtown apartment buildings because of health concerns about secondhand smoke, according to company officials.

Smokers who already live in any of these buildings will not be affected, according to Jeff Brodsky, a president of Related, which is a national developer with 17 buildings in Manhattan.

But any new renters must promise not to smoke at home, even if they continue to elsewhere.

Kenbar Management, a local developer, is going a step further. When its new project, 1510 Lexington Avenue, opens in December, smoking will be banned in all 298 units, in addition to private and shared terraces.

And the typical smoker’s refuge — directly outside the building — is also off limits; tenants must agree not to smoke on any of the sidewalks that wrap around the building, which takes up most of a block in East Harlem, according to Kinne Yon, a Kenbar principal.

The trend has predictably divided smokers and nonsmokers in New York.

“I think it’s absolutely absurd,” said Bryan Marx, 53, a cabinetmaker who has lived at Tribeca Park, a Related building on Chambers Street, since 1999. He smokes hand-rolled cigarettes in his apartment, but said that he cut back on a cigar habit a few years ago to appease a neighbor.

“How about a little tolerance?” Mr. Marx added. “Smokers have become the whipping boys for everything that’s unhealthy about living in New York City.”

Across the country, the movement to ban smoking in residential buildings is gaining traction. The Department of Housing and Urban Development has strongly encouraged public housing agencies to ban smoking in some or all of their units.

So far, about 50 public housing agencies have now forbidden smoking, according to Betsy Feigin Befus, a lawyer with the National Multi Housing Council, a landlord trade group that has tracked the efforts.

Other cities, through legislation or by initiatives of developers, have taken similar steps. In California, for example, all apartments and condos in Richmond, near San Francisco, must outlaw cigarette smoking, according to an ordinance passed in July. Across the bay in Belmont, a ban on smoking in apartments took effect in January after a 14-month grace period, with $100 fines possible for offenders.

While there is no question about the dangers of secondhand smoke, there is debate about whether the amount of smoke that may be transmitted from one apartment to another is harmful. A recent study by New York City’s health department found that about 57 percent of nonsmokers had been exposed to substantial levels of cigarette smoke, raising suspicions among experts that apartment dwellers might be susceptible to secondhand smoke from their neighbors.

New York City has been at the forefront of efforts to ban smoking in bars and restaurants, and the city’s health commissioner, Dr. Thomas A. Farley, said in September that he supported a ban on smoking at city beaches and parks. But the city, he said, has no plan to push for a smoking ban in public housing developments.

The city did help Related research the health effects of smoke in apartment buildings, Dr. Farley said, adding, “Our focus would be on individuals having their homes smoke-free.”

Pan Am Equities, a real estate management company, may have been one of the first in New York to introduce a smoking ban to an apartment building. About 18 months ago, the company asked new renters to promise not to smoke; the ban did not affect existing tenants, according to David Iwanier, a company vice president.

All of Pan Am’s rentals — which include 270 Park Avenue South, 145 West 67th Street and 60 West 23rd Street — are affected, though Mr. Iwanier would not discuss the reasons for the ban.

“It was just something we decided to do,” he said. And in terms of lease renewals, he added, “we’ve not had any negative feedback.”

Mr. Brodsky, of Related, said that existing tenants would be reassured that they would not be evicted or pressured to leave. He would not specify which of the developer’s buildings are in line for the ban, saying only that they are among the six in or near Battery Park City and Chelsea. Those include Tribeca Park; the Caledonia, which abuts the High Line park; and Tribeca Green in Battery Park City, which bills itself as “New York’s most environmental rental.”

“I think it’s a bloody good thing,” said Dale Smith, 41, a Broadway producer who formerly worked in the health care industry. A resident of Tribeca Green for nearly three years, Mr. Smith, who does not smoke, said he had complained to his landlord about secondhand smoke in his apartment.

“A policy that is in place because something has proven to be hazardous in eating establishments should be effective in the home,” he said.

Experts say there is no known law in the United States that prohibits landlords from banning smoking in their buildings, and many trial judges have sided with the nonsmoker. In New York, for example, a 2006 decision found that tenants had the right to break a lease because the landlord failed to safeguard an apartment from secondhand smoke.

Co-ops and condominiums have been somewhat slower to embrace such bans, according to real estate lawyers.

In interviews with several lawyers who represent real estate concerns, only one, Stuart Saft, knew of any buildings that had instituted a smoking ban. He said that of the 100 or so co-op buildings he represents on the Upper East and West Sides of Manhattan, only two have banned smoking outright in the last few years.

A poll commissioned by the NYC Coalition for a Smoke Free City suggested that a residential smoking ban might not hurt rentals or sales. The survey of 1,000 New Yorkers, which was administered by Zogby International in July, found that 58 percent would pay more to live in smoke-free housing; 68 percent might not live in a smoking building in the first place.

Yet some real estate brokers question the wisdom of instituting a smoking ban during a housing downturn, with vacancy rates climbing.

That 950,000 New Yorkers — or 16 percent of the population — call themselves smokers, according to the city’s health department, is not insignificant, said Daniel Baum, chief executive at the Developers Group/The Real Estate Group of New York, a brokerage that focuses on rentals.

“I think in general it’s probably not an ideal time to try to limit potential tenants,” Mr. Baum said. “Every occupied apartment counts.”

And Audrey Silk, the founder of Citizens Lobbying Against Smoker Harassment, a nine-year-old advocacy group, said the trend was troubling from a civil liberties perspective.

“If we’re talking about annoying odors, where do you draw the line?” she said. “What about cooking odors, from fish or curry?”

Yet some smokers seemed resigned to their fate. Brian Mossotti, 28, a day trader, moved into the Pan Am-run building on 23rd Street 14 months ago, after the developer’s ban had taken effect. After receiving three warnings from management about fumes in the hallway, including a stern letter in September, Mr. Mossotti finally agreed to take his two-a-day cigarette habit to the sidewalk, he said.

“You can’t smoke in bars because of the whole secondhand smoke thing, so it doesn’t surprise me,” he said. “But it is irritating.”