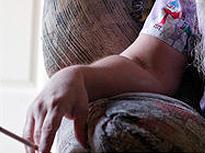 Many parents have a no-smoking rule when it comes to the home. But if you live in an apartment and the neighbor upstairs lights up, is your child exposed to cigarette smoke?

Yes, says a new study that analyzed a marker of tobacco exposure in children’s blood samples. The study tested for cotinine, a tobacco metabolite used to assess exposure to secondhand smoke, and found that children living in apartments had higher levels of the chemical in their systems than those who lived in detached houses, even though their own units were smoke-free zones.

The study is the first, the authors say, to provide evidence not only that cigarette smoke flows from one unit to another through vents and air ducts, but that children living in multiunit housing are exposed to smoke involuntarily, on a regular basis, even when their parents are trying to protect them. It didn’t matter how wealthy the families were — if they lived in an apartment, their children were exposed to more tobacco.

“People already understand that smoke doesn’t stop at the doorway,” said Dr. Jonathan P. Winickoff, associate professor in pediatrics at MassGeneral Hospital for Children and senior author of the paper, published online today in the medical journal Pediatrics. “This study is the last link in the chain of evidence: it doesn’t stop at the doorway — and we see it in the blood of kids.”

The findings could potentially open a new front in the battle over smoking bans, moving it from public spheres like workplaces, airplanes, restaurants and bars into the more private zone of people’s homes.

The surgeon general has said there is no safe level of exposure to tobacco smoke, and several public health experts said the findings, combined with earlier reports, justify efforts to ban smoking in public housing, where low-income children are already burdened by high rates of asthma and other chronic illnesses. The new evidence could also provide ammunition for apartment dwellers trying to pressure landlords and co-op boards to make entire buildings smoke-free, several experts said. Officials with the federal Department of Housing and Urban Development wouldn’t comment on the study, but last year the agency urged local public housing authorities to establish smoke-free policies.

The new study, along with others, shows that “people who live in multiunit dwellings are being exposed to tobacco smoke even though they are choosing not to smoke, and that’s significant,” said Dr. Michael Siegel, a professor of community health sciences at the Boston University School of Public Health.

“It’s very different than even smoking in a restaurant or a bar,” said Dr. Siegel, who has been a critic of some of Dr. Winickoff’s research in the past. “You can make the argument that you don’t really have to go to a restaurant, or you could go to another one. But you cannot say, ‘You don’t have to live in your home.’ This is truly involuntary.”

The findings might explain why more than half of nonsmoking New York City residents have elevated levels of a nicotine byproduct in their bloodstream, despite the city’s stringent anti-smoking laws, according to a recent report. A vast majority of city residents live in multiunit housing; nationwide, 80 million people live in shared multiunit housing, said Andrew Hyland, a researcher at Roswell Park Cancer Institute in Buffalo.

For the new study, the researchers analyzed blood taken from a nationally representative sample of just over 5,000 youths ages 6 to 18. The children lived in all types of housing, including apartments, detached and attached houses and mobile homes. Anyone who lived with someone who smoked inside the home was excluded.

And the mean level of cotinine among children living in apartments was higher: 0.075 nanograms per milliliter, compared with 0.053 in those living in attached houses and 0.031 for those in detached houses.

“At every cutoff level of exposure we studied, a higher proportion of children in multiunit housing were exposed to tobacco smoke,” Dr. Winickoff said.

Dr. Hyland and Dr. Siegel said that even at such low levels, the exposure could have an impact on children’s health, aggravating existing asthma, for example.

“People are going to say, ‘Gee, I didn’t know this, and my kid’s had ear infections for the last three years; I wonder if it’s because of this continuous low level of exposure they’re getting coming home from day care and just living their lives,’ ” Dr. Hyland said.