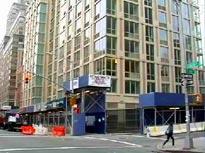 A new residential rental building on the Upper East Side is joining a growing trend in the city by going smoke free. NY1’s Shazia Khan filed the following report.

A breath of fresh air. That’s what one developer is offering New Yorkers at 1510 Lexington Avenue. The new luxury rental high-rise is the first residential building in the city to ban smoking in all its units as well as its public spaces.

Tenants and their visitors are also banned from smoking within 25 feet of the building. Developers Kinnie Yon and her brother Neal Sigety are principals at Kenbar Management. They say the decision to go non smoking in the development came with the choice to acquire LEED certification, the benchmark for green buildings.

“As part of LEEDs there is a requirement that you control tobacco smoke so that it doesn’t infiltrate other apartments in the building, and we said we’re building this LEED certified green healthy building why do we even allow smoking?” Yon said.

The 298 unit rent stabilized building, ranging from studios to three bedrooms, is slated to open next month. Each apartment features floor to ceiling windows and a washer and dryer. Amenities will include a cafe, fitness center and a children’s playroom. Developers say even in this soft rental market, they are confident they will attract tenants.

“If you are a smoker and you want to smoke at home, there are many buildings that would love to have you as a tenant today and that we believe that people who would like to live in a non smoking environment should also have a place,” Sigety said.

Citing health concerns over secondhand smoke, 1510 Lexington is not alone in the movement to ban smoking at home. Other buildings like the Tribeca Green in Battery Park City have started to take similar measures, enforcing a no light up policy for new tenants and their guests.

In a city where smoking is not allowed in restaurants and bars and may one day be banned in parks and beaches, New Yorkers seem to have mixed opinions about this new direction in housing.

“I think it’s trying to keep the air clean for everyone in the building and that’s a good thing,” said one New Yorker.

“Non smoking in my home? Well I don’t really agree because it’s my own home, it’s my own privacy. I should be able to do whatever I want,” said another New Yorker.