Non-Smoking Apartment Buildings on the Rise Apartment renters now have the option of living smoke-free. 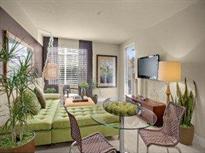 Apartment renters now have the option of living smoke-free in many cities. In Pasadena, the 480 newly constructed units at the Westgate Apartments are designated non-smoking.

When the complex developed by the Sares-Regis Group is completed in early 2011, there will be no smoking allowed inside apartments or in its common areas: good news for those looking for a healthy, smoke-free environment. Tenants benefit from cleaner air and no concerns with secondhand-smoke from other renters or their visitors.

“There is a growing awareness of health hazards of second-hand tobacco smoke as it drifts through units, through floors and even through plumbing and electrical conduits,” says Esther Schiller, executive director of the non-profit organization Smokefree Air for Everyone. More apartment renters nationwide are searching for non-smoking apartment buildings and health is their number one concern, says Schiller. (Approximately 20 percent of U.S. adults are smokers.)

Smoke-free apartment buildings like the Westgate are also another way to live green, says Zoe Solsby, a spokesperson for Sares-Regis Group. “It’s becoming more and more popular,” says Solsby of the environmentally sensitive option for renters. But are the benefits real for renters in a non-smoking building?
Insurance companies certainly think so, says Schiller. She contends that they’ll sometimes offer discounts on renters’ insurance because of the reduced fire hazard to those in non-smoking properties. Non-smoking apartments are also easier to maintain, as anyone knows who has ever rented an apartment where a smoker has lived: The odor of smoke remains long after a tenant leaves. Not to mention the fact that numerous studies detail the dangers of second-hand smoke, especially for children.

But how do landlords enforce the non-smoking rule?

Leases can now include language that bans smoking of any burning product inside and outside; tenants who are non-compliant are subject to eviction. As a.Los Angeles Times article on the Westgate pointed out, it is currently legal for landlords to forbid smoking. Just as landlords can bar pets, which do not come under fair-housing laws, landlords can also forbid smoking. And many states, including California, have legally banned smoking in public spaces.

The fact that major developers have committed to establishing a smoke-free complex is welcome news to Schiller. She points to Sares-Regis’ commitment as a significant boost for the trend as the firm is behind 19,000 apartments/residences in the Western U.S. Another Sares-Regis project, The Crossing in Anaheim, Calif., is also designated non-smoking.

Find non-smoking apartments for rent in your area on RentedSpaces.